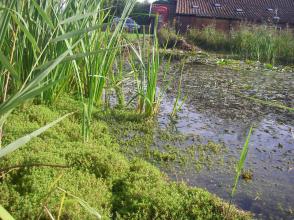 New Zealand pygmyweed (Crassula helmsii), also known as Australian swamp stonecrop, is an aquatic plant that was introduced to Britain from Tasmania in 1911 and was first recorded in the wild in 1956. New Zealand pygmyweed is an extremely invasive species which is not easy to control. New Zealand pygmyweed reproduces vegetatively. Fragments of this species can easily be spread on clothing or equipment (e.g. cars, boats, fishing equipment, clothes) or by animals. Although predominantly it reproduces asexually this species has been known to produce seeds although the viability of seeds found in the UK and Europe is uncertain, germination rate is thought to be very low although not impossible. The plant can assimilate CO2 for 20 hours of the day when submerged and grows throughout the year without a dormant period. It grows in three forms, it has a terrestrial form and in the water it can grow submerged or emergent from the water.

It forms dense mats on water bodies that shade out other aquatic vegetation, consequently having a negative impact upon fish and invertebrate communities. These mats of vegetation can impede drainage and lead to flooding, reduce the amenity use of the affected waterbody and out-compete other aquatic vegetation. Severe oxygen depletion can also occur in the water under dense growths of this plant. New Zealand Pygmyweed can also increase the risk of flooding and restrict amenity activities, such as fishing. 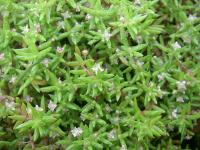 Native to: Australia and New Zealand

Habitat: still or slow flowing water up to 3m deep. It can also be found along the terrestrial margins around waterbodies

I’ve found New Zealand pygmyweed on my land. What should I do?

Maintaining good biosecurity practices is key to getting a hold on this species because it can travel very quickly and easily by tiny fragments. This species infests pond habitats so it is important to clean equipment, clothing and even vehicles before moving away from the site, it can and does easily travel between ponds in this way.

Often the best way to deal with this species is to fill in the pond and dig a new one, although this is often not practical. There can be some success using chemical techniques (glyphosate based herbicides) although this works best when in contact with the leaves so should only be used for terrestrial and emergent growth. Draining the area before applying herbicides is advised (although often not practical) to be able to eradicate the submerged plants. Mechanical and manual pulling techniques should only be used if there are no other viable solutions and with extreme caution, these techniques will likely to result in fragments breaking off and spreading the plant. A fine mesh net should be used to remove any fragments left behind. These techniques will often only result in a reduction rather than complete eradication, especially if it is growing in its submerged form. They can also be destructive for native fauna (such as amphibians and insects) so it is advised that you place any dredged material on the banks before composting or burning to allow animals to go back into the water body. This area should be monitored for regrowth both on the banks and in the water.

I want to report an infestation of New Zealand pygmyweed

If you are unsure whether you have New Zealand pygmyweed on your land images can be emailed to NNNSI and we can help with identification. We can also help out with management advice. If you report a sighting to us, we can update our records on the distribution of this species which will can be used to formulate future countywide management practices.